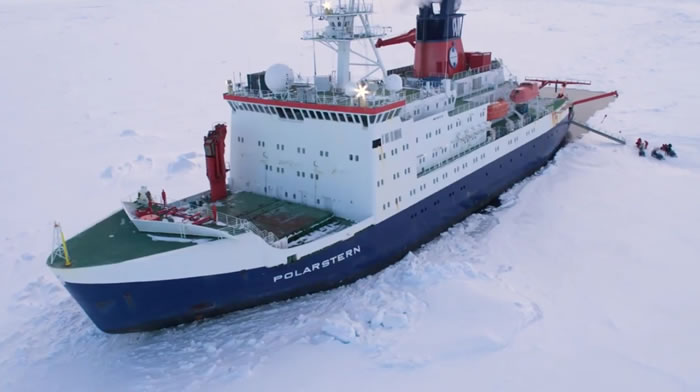 Starting in autumn 2019, the German research icebreaker Polarstern will spend the next year drifting through the Arctic Ocean, trapped in the ice. Surrounding RV Polarstern, a network of research camps will be formed on the 1.5-metre-thick floe. Here the various teams will set up monitoring points to investigate the ocean, ice and atmosphere, as well as life in the Arctic winter. The data gathered will take climate and ecosystem research to the next level.

The Arctic is generally considered to be an early warning system for climate change. The dark water absorbs more energy than the ice, which reflects solar radiation, and thanks to the thinner ice, more heat is making its way from the comparatively warm ocean to the surface and into the atmosphere. In this way, feedback effects are significantly amplifying the warming of the Arctic.

The “Mosaic” mission will be spearheaded by the Alfred Wegener Institute, Helmholtz Centre for Polar and Marine Research (AWI). A total of 600 people from 17 countries, who will be supplied by other icebreakers and aircraft, will participate in the expedition.

An advanced IHSE KVM system installed on Polarstern delivers flexible access to computers and special equipment. Operators and scientists can instantly view and access all relevant information and data located on remote computers in secure equipment rooms aboard the ship. Such a mission-critical project requires maximum system reliability and safety.